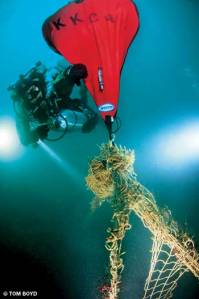 The following article is reproduced here by kind permission of the author, MICHAEL MENDUNO, and was first published in the Winter 2014 edition of ‘Alert Diver’ magazine.

With a “vegan” patch on the right sleeve of her neon-green drysuit and a “Sea Shepherd” patch on the left, a black mask, double backmounted 130s, two bottles of deco gas, black jet fins, heavy gloves, an oversized orange lift bag and a razor-sharp net cutter, Heather Hamza looks like some kind of modern-day superhero. The resemblance goes deeper than looks.

At least once a month, the petite, 43-year-old nurse anesthetist turned animal-rights activist leads a team of volunteer technical divers to cut and remove derelict fishing nets, aka ghost nets, from southern California wrecks such as the Infidel, a sunken commercial squid boat that lies at 150 feet off the backside of Santa Catalina Island.

Hamza’s crew typically consists of three “deep teams” (lift-bag stagers, net cutters and a video crew), two or three support divers and some topside net haulers drawn from some 50 volunteers. On a good day, when the ever-changing currents are manageable, the team can remove up to 2,000 pounds of abandoned netting in the course of two 60- to 90-minute working dives, saving countless creatures from a ghastly fate. Unfortunately, there is no shortage of work for them do.

Every year hundreds of miles of commercial fishing nets and traps are discarded, lost or snagged on shipwrecks or reefs and left abandoned. They continue to indiscriminately trap and kill sea life, scrub reefs and smother marine habitat, hence the term “ghost fishing.” In 2009 the United Nations Food and Agriculture Organization (FAO) and the U.N. Environment Programme (UNEP) estimated that there were approximately 640,000 tons of abandoned fishing nets in the oceans, accounting for one-tenth of all marine litter.

The nets wreak havoc on the entire marine food web. Small fish and crabs get trapped in the nets, and then larger animals including fish, sea birds, turtles, dolphins, seals and sea lions swim in for a meal and also get trapped and die. Hemp and nylon purse seine nets take decades to degrade, while monofilament gill nets take centuries, which vastly multiplies the nets’ killing power.

Hamza serves as the U.S. coordinator for Ghostfishing.org, a nonprofit organization founded by two Global Underwater Explorers (GUE) members based in Holland. With the help of her husband, Karim, who is a part owner of Hollywood Divers, Hamza plans and organizes trips, recruits volunteers, works to raise public awareness of ghost fishing and solicits donations and grants to support the group’s continuing operations.

Fundraising has proved difficult. Government agencies are broke, and businesses are concerned about liability; removing ghost nets is extremely hazardous and borders on being considered commercial diving. As a result, Hamza’s volunteers, who are trained deep divers from the local GUE chapters in Los Angeles and San Diego, typically split the $3,000-$5,000 cost of the charter boat and diving gases (helium and decompression mixes) on a sliding scale. Tech divers pay up to $400-$500 per trip, while nondiving topside team members each contribute $25 or more in donations.

However, Hamza is now working with the Animal Rights Advocacy Museum in Pasadena, Calif., to set up a ghost-fishing display and host a fundraiser. She is also looking into recycling ghost nets to help defer costs. To this end, Hamza has begun talks with the Aquafil Group (www.aquafilusa.com), an Italian nylon polymer manufacturer with a processing plant in Georgia, to recycle the recovered fishing nets into yarns, carpeting and plastics as part of Aquafil’s “Healthy Seas Initiative” (www.healthyseas.org).

Hamza’s long-term goal? To spur lawmakers to create state and federal legislation requiring fisherman to report gear losses when they occur (and are easier to remove) and share in the cost of cleanup. But ocean-conscious consumers have a role to play as well. “I’d be remiss not to talk about food choices when talking about ghost fishing,” said Hamza, a committed vegan and proponent of a plant-based diet. “Ghost nets are strictly a consumer-driven problem.”

The above article, by MICHAEL MENDUNO, appeared in the Winter 2014 edition of Alert Diver magazine. (http://www.alertdiver.com )