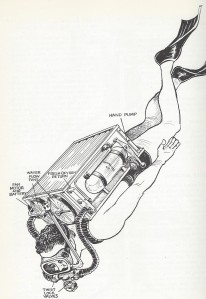 By 1974 the U.S. Patent Office had already awarded patents on, “two artificial gills which enabled a free swimming diver to extract oxygen dissolved in sea water for his respiration. Carbon dioxide elimination is accomplished through the same device.

“Though this device has been successfully tested in shallow water, it does appear to have a definite depth limitation. Air in the apparatus is at atmospheric pressure. … a significant obstacle (that) temporarily blocks the development of this apparatus.”

(Image and quoted text from, 1974 revised edition of, ‘Diving For Fun’, by Joe Strykowski.)