Home › General › The things we do for love

The things we do for love 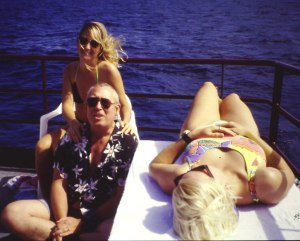 According to a recent statistical survey, forty percent of the world’s adult population are, at any one time, actively engaged in the search for a suitable partner while another forty percent are anxiously trying to remove themselves from a relationship turned sour.

Not that this has any direct bearing on diving, but as any person who has spent time observing otherwise happy and compatible couples will attest, diving with a soul mate can sometimes put a strain on the strongest of relationships.

Convinced that their affection for one another will grow stronger through a shared experience – and that, “the couple that plays together stays together” – they view diving as the perfect activity: And why not? As a recreational pursuit it can be enjoyed on an equal footing by almost everybody regardless of age or gender; it requires only a modest degree of physical fitness; and, best of all, it relies on the buddy system.

Considered in that light, learning to dive sounds a bit like ballroom dancing but without the need to brush your hair or wear sequins.

There’s a Yin and a Yang in most close partnerships; a trade off in which the eccentricities of one complements the idiosyncratic behaviour of the other and where each, in turn, becomes either a follower or a leader according to their relevant strength or weakness in any given situation. It’s something that can work well on a shopping expedition where one person buys and the other pays, but put those same two people together in the water and even the most harmonious relationship can be stretched to breaking point.

The problems often begin when one PWP (Person With Partner) decides to take up diving and convinces the other that it would be fun if they were to learn to do it together.

(At this point it needs to be stressed that diving’s not something that appeals to everybody. While most people can quickly grasp the basic principles and master equipment handling techniques it nevertheless remains an activity that they must want to do. It’s not something that they should feel obliged to do.)

Invariably the pair will elect to buddy together during training – something that smart diving Instructors usually try to discourage – and in an unspoken agreement they adopt those everyday roles in which the dominant partner makes decisions for the other; behaviour that establishes a pattern for all of their future diving experiences together.

Instead of diving as a buddy pair, each of whom has equal knowledge and ability, the less enthusiastic of the two builds up a dependency on the other. Allowing their partner to assemble their gear, establish the depth and time parameters of the dive and its purpose, they become a passenger rather than an active participant.

Quite apart from the safety issues and the fact that it’s often a case of the ignorant leading the blind, these attitudes also accentuate the couple’s differences and can lead to deterioration in their previously happy relationship.

“It’s no good getting angry with me. You were the one who assembled my tank and told me that I’d got plenty of air. I thought that something was wrong with my regurgitator thing …”

“… regulator then. – when it started to become difficult to breathe. Anyway, you had plenty of air that I could have shared if I’d needed to. It’s probably just as well that we were only one metre below the surface.”

“But that’s only because you refused to go any deeper.”

“I’ve already told you that I’m not comfortable about doing any of those deep dives straight away. And what would have happened if we had been deeper? I might have drowned.”

“That’s only because you weren’t paying attention to your gauges.”

“I couldn’t see the point in both of us checking our gauges. And you were the one who told me that we both had the same amount of air in our tanks just before the dive. You didn’t lie to me, did you?”

“Then why did I run out of air so quickly? And why – now that I think about it more – were you trying to get me to go down deeper? You’re not a very caring person, are you?”

“Well at least I’m not an unattractive one, like you.”

“When you pushed your face mask up on to your head just then, some mucous from your nose smeared itself over your face.”

“I don’t like diving with you. In fact I’m not altogether certain that I even like you.”

Although the potential for disaster isn’t quite so great when a non-diver meets a diver, falls in love and decides to share their new partner’s passion for spending time underwater, the risk still exists. It’s especially apparent when the more experienced of the two – perhaps lacking patience and understanding – expects more in the way of knowledge and ability from their partner than they would from a novice stranger.

Or when one says something like, “I learned to dive just to please you and now you’re refusing to do something I enjoy. If you really loved me then you’d be only too happy to learn ballroom dancing and wear something frilly.”

It might be narrowing the field a little, but the best hope for divers looking for a long-term meaningful relationship as well as a perfect diving buddy is to restrict the search to those who already know how to dive.

Disclaimer: The writer wishes it to be known that even although his partner learned to dive at a later stage in their relationship, none of the above relates to any first-hand experience of the problems associated with diving with a partner.