Home › General › Things that go “bang” in the night

Things that go “bang” in the night

Accounting for more shipping losses during the Second World War than any other weapon, mines – and the measures developed to neutralise them – have played a pivotal role in the evolution of military diving. It’s a relationship symbolised in the crest of the Royal Australian Navy’s Clearance Diving Branch – a diving helmet superimposed onto a tethered mine.

Unlike the contact mines of WWII, the influence mines of today are technologically sophisticated packages triggered by acoustics, changes in pressure, magnetic influences, or any combination of the three. Rather than detonating against the hull of a ship unlucky enough to run into them, an influence mine is positioned on the sea bed in up to 40 or more metres of water. Activated when a target vessel passes overhead the mine detonates, creating a huge gas bubble of vaporised water that, expanding as it ascends, forms a hole in the water beneath the ship. Unable to remain afloat, the ship falls into the hole, breaks its back and sinks.

Combating this threat is like playing a game of three dimensional chess in turbid waters, tidal flows, currents, silt and shifting seabeds; an evolving art form rather than a science, and one in which the mine counter measures element attempts to second guess the minefield planner’s intentions and the technology that he’s using.

Despite an impressive array of mine counter measures resources, the shallow water approaches to ports and harbours, as well as the areas around wharves and buoys, still require the services of divers.

Functioning as self-sufficient units capable of almost indefinite deployment into the field, the Royal Australian Navy’s two Clearance Diving Teams (AUSCDT One, based in Sydney, and AUSCDT Four, based in Perth), are among the world’s elite diving forces.

(When Clearance divers are sent into  combat – as in Vietnam, or Kuwait during the First Gulf War – personnel are drawn from both Team One and Team Four to form Team Three. )

Consisting of some sixty personnel, with a Commanding Officer, Executive Officer, Warrant Officer and full support personnel, each Team supports three fighting elements – the UBDR (Underwater Battle Damage Repair); the MTO (Maritime Tactical Operations); and MCM (Mine Counter Measures) – two of whom (the MTO and the MCM) have Mine Counter Measures functions.

Each element consists of one Officer, responsible for maintaining the operational readiness of his section and a Chief Petty Officer who, as well as being a diving specialist, attends to the day to day maintenance of those specific skills, (like weapons and small arms training, bush navigation and combat survival training), that give the teams their operational edge.

Not all mines are targeted against shipping. On occasion they’re employed against the mine counter measures assets themselves; the mine sweepers and mine hunters that perform the Deep Water (DW) operations; as well as divers carrying out VSW (Very Shallow Water) and SW (Shallow Water) detection and disposal.

Mines are also a potent weapon in halting or slowing down amphibious beach landings. While those mines seeded below the high water mark are targeted against amphibious landing vessels, those placed above it are usually of the anti-personnel variety. Rendering these mines safe is a function of the amphibious reconnaissance divers of MTO. As a clandestine force going in under cover of darkness, the MTO operate in Very Shallow Water, placing charges on all of those mines that they discover in a field before retreating and firing them remotely.

The overt mine counter measures responsibility, (that of disposing of mines discovered in Shallow Water), belongs to the MCM element themselves. (Although capable of operating effectively to much deeper depths, the operational training focuses on the shallower ranges, roughly between 9 and 45-metres, where reduced decompression obligations apply.)

Although a diver is unlikely to be the target of a minefield planner there’s always a degree of uncertainty when dealing with a live piece of ordnance. Tactics are developed to determine how far off the diver can reasonably approach a known mine type to place a charge. But that’s a known mine. It’s possible to have a completely different set of algorithms and instrumentation within a mine of the same shape. One can never be certain of exactly what’s inside the shell. 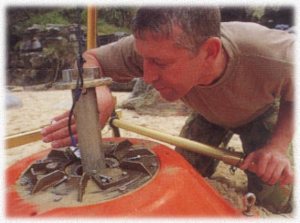 To keep the divers as safe as possible, tactics for dealing with mines are developed around the worst case scenario. For that reason a stringent series of checks on the diver and his equipment are carried out before he enters the water. This ensures that they both have as low a magnetic and acoustic signature as possible.

Because Mine Counter Measures diving requires relatively long duration underwater, coupled with a need for both acoustic and magnetic hygiene, the MCM divers use the A5800 semi-closed heliox rebreather (a derivative of the USN Mk 16), with a depth capability of 90+ metres. Even the diving knives are made of beryllium, a metal so toxic that it will poison anyone unfortunate enough cut themselves on the blade.

While mine technology has taken a quantum leap, searching for them remains a painstaking and patient process. Parallel jack-stays are laid along the sea floor allowing progressive scrutiny of the area to be searched. Working in pairs divers can employ a snag-line strung between them or, because it’s possible to initiate the firing train in a sensitive mine, they may use hand held sonar units to seek out a target.

Containing sophisticated electronic packages, a direct approach on to a mine is fraught with risk. (The mine may, for example, have an acoustic trigger to ‘wake’ it up and a magnetic trigger to initiate the firing mechanism. A whale swimming past won’t cause it to explode but a targeted ship, with metal in it, will!). For this reason the searching diver, having detected a mine, places a marker in the vicinity to help guide the supervisor to its position.

Unless the mine is the first find of its type, and therefore one that needs to be brought to the surface for ‘exploitation’, then the preferred method of disposal is to detonate it in situ by placing a charge right beside it. More often than not, however, the mine’s close proximity to sensitive areas makes it necessary to render it safe before bringing it to the surface for examination and disposal.

The Render Mines Safe (RMS) procedure is carried out by the Supervisor who places and remotely detonates an explosive charge in the vicinity of the mine (rather than on the mine itself, a process which may trigger a sympathetic detonation!). The aim is to collapse the instrumentation and disrupt the firing mechanism through over pressurisation.

The supervisor will then carry out a verification dive to look for cracks in the mine’s casing, air bubbles, or other signs that the charge has rendered the mine safe for handling. Ideally the RMS procedure cracks the casing and floods the electronic componentry.

The person supervising each job is the person who determines when the mine is safe to move. Once satisfied that the RS procedures have been effective a lifting bag, made of non-magnetic material, is attached and – when the team has withdrawn to a safe distance – remotely activated. Once on the surface a tow line attached to the lifting bag is used to move the mine to a pre-determined beach where the supervisor can work on removing the mine’s fuses. And there’s always the risk that the render safe charge has only made the mine’s sensors temporarily ‘dizzy’ rather than disabling them.

While locating mines and placing charges, particularly in murky waters or strong currents, is dangerous work, mine counter measures forms only part of the Clearance Diver’s role in EOD (Explosive Ordnance Disposal). He’s also called upon to deal with surface threats, from bombs, Improvised Explosive Devices (IED) and booby traps through to ordnance from WWII.

Because there will always be, in the foreseeable future, a role for a guy to go down and dive on a mine, AUSCDT One (and AUSCDT Four) are constantly honing all of their many skills. Providing the RAN with a range of skills not found in other Navies, the Clearance Divers are very capable people with exceptional abilities.

AUSCDT THREE in the Gulf

In January, 1991, AUSCDT Three was reformed with personnel from across the force and was despatched to Bahrain to help the U.S. Marines prepare for the proposed amphibious invasion of Iraqi occupied Kuwait.  As Operation Desert Storm progressed the requirement for an amphibious assault lessened, the Team’s primary mission became the Explosive Ordnance Disposal [EOD] clearance of the ports of Kuwait.

The twenty-three man team entered Kuwait by land on the 5th March.  Joining almost fifty other divers from the US and Royal Navies they began the dangerous task of clearing wharves and warehouses of unexploded ordnance and booby traps before entering the oil blackened waters of the harbour to search for, and dispose, of sea mines.

During the next seven days AUSCDT Three cleared over 450,000 square meters of seabed, searching for both buoyant contact and influence ground mines.  An effort that represented seventy per cent of the harbour area cleared by coalition forces by the time the port re-opened to shipping.  Their efforts weren’t restricted to below the surface operations.  During this time the Team also rendered safe three Iraqi seamines, carried out booby trap clearance on a nearby oil refinery and assisted US personnel to recover six anti-ship missiles from the Kuwaiti Girls Science High School.

Moving south, AUSCDT Three were next tasked with clearing the Kuwaiti Naval Base of Ras Al Qualai Ah.  The ten day operation involved removing booby traps and rendering safe thirty-one sea mines.  Back in Kuwait City the Team continued work on clearing the harbours and beaches that were Kuwait’s lifeline with the world.

On the 11th May, after three and a half months deployed, AUSCDT Three returned to Australia to be disbanded and members returned to their parent Teams.  During their time in the field they had cleared four ports, dealt with 60 seamines, cleared 234,986 pieces of ordnance and searched an astonishing 2,157,200 square metres of sea bed!  They lost count of the number of booby traps that they had to contend with!

AUSCDT Three had distinguished itself well in Kuwait and earned for the RAN Clearance Diving Branch an international reputation for skill and professionalism.  Recognition of their achievements included the award of two Conspicuous Service Cross’s, 1 Order Of Australia Medal, 4 Conspicuous Service Medals, an Australian Meritorious Unit Citation and an Admiral’s Commendation.

An expanded version of the above article was first published in Professional Diver Journal in 1999.