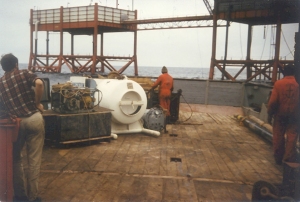 In which, I meet up with old friends, lose a ‘new’ one, and learn some valuable lessons about diving, dive planning, dive equipment – and the meaning of life.

Some months after the events described in Part One of this convoluted tale – and in another sector of the North Sea – we were tasked with surveying the seabed around a new, unmanned, production platform recently constructed next to a drilling-rig. The water depth was well in excess of 140 feet with an ascent/descent line running from the drilling rig’s catwalk down to the base of the production platform.

It was a sunny day with the lightest of swells. A supply boat, with its stern moored to the drill rig, was preparing to offload stores and drill pipe when we entered the water. On this occasion, my buddy – new to the team – and I were the first to dive while the second group of three divers stood ready on the lower catwalk.

Despite the surface conditions it was midnight dark at depth and we both carried lights. Our plan was to follow the horizontal struts connecting each of the legs while sketching ‘mud maps’ on slates as we went. Because of the reduced visibility we were no more than an arms length from each other. Two or three minutes after arriving on the bottom – while traversing the first strut – my regulator went ‘POP’. I gave a tentative suck on the mouthpiece. Instead of air, I received a trickle of water.

I immediately reached for my buddy, briefly shone the light on my face, spat out the regulator and indicated that I was in distress. He stared at me. I plucked his regulator from out of his mouth and took a healthy suck of air. He seized it back. In my mind’s eye, I had a vision of us both buddy breathing and making our way back to the ascent line. His view of the situation differed from mine. He disappeared.

Rather than ponder my predicament, I immediately began finning hard towards the surface. It would be nice to be able to say that I had calmly assessed the situation and was totally in control. Regrettably, I can’t. All that I can say is that some prior training must have automatically kicked in. I kept my airway open; “Aaaahhed” all the way to the surface; and at some point ditched my weight belt.

At the surface, I registered the fact that the tidal flow had carried me away from the platform. Despite the post-adrenaline exhaustion my legs continued to peddle as I barely managed to keep my head above water, breathing great gulps of air.

Back on the platform our predicament had gone un-noticed. (My erstwhile ‘buddy’, had also ascended, but he too had been carried away by the tide.) Meanwhile the skipper of the supply boat – who’d been standing on the bridge scanning the nearby ocean – spotted a figure splashing on the surface. He radioed the platform’s control room. “Have you got divers in the water? ’cause I think one of them’s on the surface.” A runner was despatched down to the catwalk. It was confirmed that two divers were in the water. A radio call went out for the nearest stand-by boat to search the area.

Exhausted – and lacking the good sense to ditch the twin-cylinders – my head was constantly dropping face down into the water as a stand-by boat pulled alongside. I was scooped out of the water and dumped onto the deck. My cylinders were removed and I rolled over into the scuppers where I lay face down being violently ill.

A short while later, I registered the fact that a voice was saying, “You could probably use a hot mug of tea. How do you take it?” I heard my buddy’s reply and then the first voice saying, “What about your mate?” I turned onto my back. “Well, bless my soul. It’s you, Strike. Black tea, no sugar, isn’t it?” said the deck-hand. I was back aboard the ‘MARGARET CHRISTINA’.

We were both quickly transferred to the drill rig. Following a stint in the Deck Decompression Chamber for “observation”, the first thing that I did was to bitterly complain about the fact that the Chief Diver had presented me with an invoice for the dropped weight-belt. The second was to send a radio message “IOU” for drinks to the crew of the ‘MARGARET CHRISTINA’.

With an eye on bottom line profits – and not a little greed – what, even then, should have been regarded as obvious and common sense safety procedures, went by the board. While we planned each underwater task in meticulous detail we rarely, if ever, discussed or prepared ourselves for the ”What if’s …” of diving. The dive plan itself was virtually non-existent as far as emergency drills were concerned. In fact a cynic might claim that our diving practices were appalling. With the wisdom of years and the benefit of hindsight, I’m inclined to agree.

By the mid-seventies it had become apparent that the standards and regulations covering diving were totally inadequate to the conditions and tasks that divers were called upon to perform. It was then that the UK Government introduced legislation aimed at ensuring that equipment and operational procedures were adequate to meet the high risks involved in occupational diving.