Send down a diver – Part Two 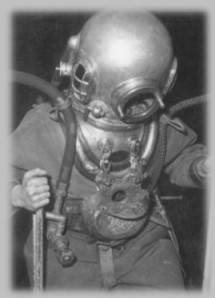 Throughout the second half of the nineteenth and into the early years of the twentieth centuries, the pace in successful deep diving had been set by civilian divers such as Lambert and his contemporaries. Relying more on guts than on intellect these early salvage diving pioneers risked crippling injuries and even death for the sake of reward.

By 1904, the deepest recorded dive had been performed by a team of Greek and Swedish divers carrying out an inspection on the hull of a sunken destroyer lying in 190 feet of water; a depth almost twice that of the 100 feet limit set by the Royal Navy on its own divers.

With little funding for scientific research, both military and civilian divers remained part of an ‘obscure sect’ who continued to suffer the effects of poor theory and dangerous techniques until a leading scientist, Professor J. S. Haldane, convinced the Admiralty to establish a commission tasked with studying diving and the effects of pressure on the human body.

Science steps in
Formed in 1906 the commission, headed by Haldane, sought the services of experienced divers “with brains, courage and patience” to act as human guinea pigs. He found such people at the Navy diving school. Gathering together a group of scientists and divers like, Lieutenant Damant and Petty Officer Catto, the team began to formulate the first valid decompression tables as they gradually achieved deeper and deeper depths: Trials that culminated in Damant achieving a depth of 210 feet and, after a series of decompression stops, ascending safely back to the surface. It was another eight years before a diver went deeper.

Although the United States Navy had established a diving school in 1882, by 1912 practically the only task that fell to its divers – restricted to a depth of just 60 feet – was the recovery of practice torpedoes in a test range.

Knowing of the work undertaken by Haldane and the Royal Navy, Chief Gunner George Stillson successfully lobbied for a similar programme of diving research and development. Joined by a surgeon who had studied at the Royal Navy Diving School, the team worked towards dives in excess of the 200-foot mark. In 1914 they achieved a depth of 274 feet in the open sea.

In setting these depth records both the US and the Royal Navies had practical aims in mind. When, in 1915, the U. S. Submarine F-4 sank off of Hawaii, in 304 feet, Navy Diver Frank Crilley reached the submarine in a dive that has rarely if ever been equalled by a helmet diver breathing compressed air.

Sharing their knowledge of decompression procedures and deep diving techniques with their civilian counterparts, salvage diving entered a new era of professionalism. The challenge that now remained was to find a breathing mixture other than air that would allow divers to safely go to even deeper depths and remain unaffected by nitrogen narcosis and oxygen toxicity.

Helium: Cream of the crop.
In 1919, Professor Thomson, (inventor of the cream separator) studied the effects of helium on animals and decided that, as an inert gas with low solubility, it would prove a suitable replacement for nitrogen in the breathing gas used by deep sea divers.

Although experiments with helium began in 1925, it was another twelve years before the US Navy Experimental Diving Unit began practical studies of its use in diving. In that same year (1937) when U.S. Navy physiologists had succeeded in putting a diver down to a simulated depth of 500 feet in a chamber, engineer, Max Nohl – who had similarly been working on the concept of helium as a replacement gas for nitrogen and who had designed his own helmet and equipment – made a successful dive to 420 feet in Lake Michigan. A depth later matched and exceeded by Navy divers who achieved 440 feet.

No longer suffering the debilitating effects of nitrogen narcosis, U.S. Navy divers were now able to perform meaningful work at depth. One of the most notable instances being the rescue of surviving crewmembers of the stricken submarine USS Squalus, in 1939, and its eventual salvage from a depth of 230 feet.

Determined to remain in the deep-diving race, the Royal Navy, in 1948, began its own programme to see how deep a diver could go in the event of deeper submarine sinkings. Helium, however, was in short supply. With the only known wells located in the United States and its export limited by Congress in order to deny Germany the possibility of building bomb-carrying zeppelins, Britain possessed only a small reserve of the gas acquired under the Lend-Lease programme.

Reclaiming the sea floor
In a series of dives made from, HMS Reclaim, moored in Loch Fyne, Scotland, the diving team progressively broke record after record while, at the same time, formulating new decompression tables. Dispensing with the American helium helmet, the Royal Navy adopted the Siebe, Gorman injector helmet and, to avoid lengthy in-water decompression, also used a Submerged Decompression Chamber (SDC). The final dive in the series was made by Petty Officer Bollard, who achieved a depth of 540 feet; a record that was to stand for another eight years.

In 1956, in a subsequent series of deep diving trials from HMS Reclaim, Senior Commissioned Boatswain, George Wookey, descended 600 feet into a Norwegian fjord where he performed a series of tasks designed to simulate those required by a diver rendering assistance to a sunken submarine.

It was the last time that a diver would descend to such depths wearing a bulky ‘hard-hat’ flexible dress and towing an umbilical hose connected to the surface. Future deep diving trials would employ entirely different equipment and techniques. And as military interest in deep diving waned, commercial interests would again come to the fore … and in turn set the scene for the advent of Technical Diving.