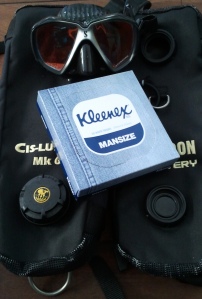 It’s easy to tell the seasoned travellers aboard an aircraft; they’re the ones who, when the captain announces, “Cabin staff close all doors and cross check.”, immediately begin reading a book or magazine, studiously ignore the safety briefing, and only emerge from their cocoon of apparent indifference when the drinks trolley approaches. In that regard alone, flying and diving have a lot in common.

Having once been stung by a swooping bumble bee – and then been told that, according to the Laws of Physics, the creature’s general shape and weight renders it incapable of flight – I’ve always been slightly wary about being cooped up in a large aircraft flying ten thousand metres or so above the ground; especially when the major items of safety equipment – a lifejacket and an oxygen mask – seem to be more in keeping with escape from a submarine.

Which is one of the reasons why I pay attention to the crew-member’s briefing. Apart from anxiously hoping that they’ll point out where they hide the parachutes, I’m also curious to see whether any of the airlines ever take up my suggestion of including sensors above each seat that, following a succession of sniffs, snorts and sneezes from passengers with colds, will trigger the release of a large box of tissues from the same overhead space where they stow the oxygen masks.

It seems that whenever I’m going on a dive trip involving air travel, I usually wind up being seated next to a stranger with no handkerchief and whose sinuses are hopelessly out of control.

When diving, of course, what people do with their excess mucous is, quite literally, between them and their facemask, (and in any event is nothing that the judicious use of a handful of seawater before climbing back on board the boat can’t cure.) But in the close confines of an aircraft cabin – where there’s no escape from all the bugs and viruses that haven’t been vacuumed up by the constant gurgling power-snorts of the passenger seated next to me – I live in fear that one or other of the little bug-gers will find my nasal passages more attractive than those of their previous owner, set up shop, and then develop into a full blown cold that’ll prevent me from diving.

It’s a constant concern of mine, and one that leads me to think that far too much emphasis is placed on the problems associated with flying after diving, and not enough thought given to what can happen while you’re up there in the air before going diving; not least, the risk of catching that most common of all contra-indications to diving fitness, a cold.

For a diver, a cold can be either a curse or a Godsend. Although I’ve never had to put it to the test, (and I doubt its wisdom anyway) it often used to be said that it was possible to dive with a broken arm or leg but catch a cold and it would stuff up your whole diving day.

On the other hand, faced with the prospect of either getting up early to battle through rough seas before plunging into cold, dark water, or spending longer in bed, I’ve always found it remarkably easy to claim that, “as buch as I want to do this dibe, I cart ‘cause by dose is blocked.”

Coping with a cold is something that most divers will have to deal with at some time during their diving career. How they choose to handle it will differ enormously – especially when the onset of symptoms coincide with the start of a long-planned dive vacation. Unwilling to forgo a few days diving, and prepared to run the risks associated with possible congestion in the lungs and Eustachian tubes, some divers turn to pills, potions and folk remedies to allay the discomfort.

“You should try my remedy for colds,” an unsympathetic friend recently advised. “Just go diving and snarf some saltwater up your nose. It works every time.”

As he was an underwater welder rather than a medical practitioner, it wasn’t advice that I was prepared to put to the test. (Especially in light of an earlier bad experience when, during the course of a dive, I’d inadvertently managed to inhale a quantity of seawater. Later that day, while trying to impress a good-looking girl by convincing her that my only interest in her body was as a stepping-stone to her mind, my natural charm and wit took a tumble when all of the salt water that I’d previously inhaled decided that it had had enough of my sinuses and exited the system straight into the cup of coffee that I was raising to my lips.)

More widespread, however, is the use by divers of decongestants as an aid in equalisation. Usually in the form of nasal sprays or tablets many of these preparations contain antihistamines or pseudoephedrine, whose side effects, among other things, may cause anxiety, vertigo, drowsiness, a heightened susceptibility to nitrogen narcosis, and even increase the risk of oxygen toxicity, (especially when breathing oxygen enriched mixtures.)

Seldom considered a life-threatening illness on the surface, the common cold – and the remedies used to treat it – can be just that when the desire to dive over-rules common sense.

Which is why, when I have a cold, I prefer to stick to my old Dad’s remedy of putting myself to bed, staying warm, and drinking lots of hot milk, honey and whiskey, (the hot milk and honey being optional.) It’s a far more comfortable place to be than sitting in an aircraft – and I can sniff and snort to my heart’s content without offending anybody else’s aesthetic sensibilities.