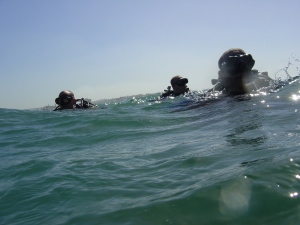 Having an understanding of the problems posed by the environment and a basic knowledge of natural aids to navigation is fundamental to every good dive plan.

Measuring current strength
From an anchored vessel, the diver drops a small low-profile marker buoy attached to 50-metres of light line over the side and notes the time taken for it to travel to the limit of the line. He also takes a compass bearing on its direction of movement – which should be the same as the boat swinging on its anchor and which, for the purpose of this exercise, is due south at 180°. If it takes the buoy 3 minutes to travel 50 metres, then it will take 6 minutes to travel 100-metres, or 60 minutes to travel 1 kilometre. The current’s strength is, therefore, approximately 1 kilometre per hour. (To be strictly accurate, wind and wave action and their effect on the buoy’s movement also needs to be factored in to the calculation.)

Compensating for currents
Given the speed of the current, the diver plans a compass swim towards a submerged object lying in an easterly direction, 500 metres away. He knows that his normal swimming speed underwater is, say, 2 kilometres per hour; a speed that, barring the external influence of the current, would allow him to cover the straight-line distance in 15 minutes. Setting his proposed compass heading due east at 90 degrees, he begins his swim unaware of the influence that the current moving southward at 1 kilometre per hour has on his progress. After covering 500-metres while maintaining a constant compass heading, the diver finds that he is almost 250-metres downstream of where he intended to be.

In this hypothetical example, the choice faced by the diver is either to re-anchor the boat 250-metres upstream of his target and, while still swimming on the same compass heading of 90°, allow the current to carry him down to his intended objective, or – and less satisfactory in terms of effort and energy expenditure, (especially in stronger currents) – to take a bearing on a spot 250-metres upstream of the target and swim slightly into the current.