Getting Wrecked In Australia – SS Yongala 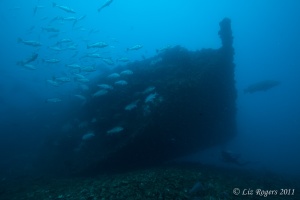 The ‘Yongala’ – courtesy of Liz Rogers, of lizrogersphotography.com

The coastlines of Australia and its near Pacific neighbours are littered with ship-wrecks. Victims to the forces of nature, piracy and battle, many have collapsed into the surrounding sea floor, identifiable only through the symmetry of coral encrustations. Others remain almost intact, their hulls and decks emblazoned with soft sponges and corals. Strange and exotic creatures have made their homes in these relics where passengers and crew once lived and worked. Forming artificial reefs of gothic proportions wrecks attract divers in the same way that cathedrals, temples and museums draw tourists. Surrounded by mystery they’re a link with the past, one that offers the prospect of excitement and discovery.

Perhaps the best known of all of Australia’s accessible wrecks, the SS Yongala lies about twenty-five kilometres east of Cape Bowling Green, to the south of Townsville.

A 3,664 ton steel steamship built in 1903 and measuring 365 feet in length, the Yongala sank during a fierce cyclone in March, 1911, while making passage from Mackay to Townsville. Search parties discovered no trace of her crew, the 120 passengers, or the 667 tonnes of cargo that she carried. 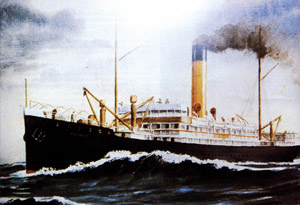 All that remained of the Yongala ‘s passing was a door, some mailbags and the shark-mauled carcass of a race-horse. Nothing further was discovered of the Yongala until the final stages of the Second World War when navy minesweepers fouled on the wreck. Diving parties investigated the area in 1958 and the wreck’s position was accurately pin-pointed.

Declared a Historic wreck in 1981, the Yongala rests in about thirty metres of water in a current-swept channel with a flat, sandy bottom. Listing to starboard, by about sixty-degrees, the upper decks and superstructure are just fifteen metres below the surface.

The only refuge for miles around, the wreck has become home to every imaginable type of marine life. Corals, sea-whips, sponges and oysters cover its hull plates, decks and rigging wires. Fish of every variety cluster to the wreck. Schools of trevally, barracuda and sweetlips sweep across the decks and through the holds. Large groupers, some estimated to weigh up to 400 kilograms, live in natural caves beneath the bow and stern, or in the dark recesses of the holds.

Around, on, in and under the Yongala there are Bullnose sting-rays, sea-snakes and turtles. Swooping schools of bat-fish queue to be cleaned at one of the many cleaning stations dotting the artificial reef, and even sharks put in the occasional appearance.

Although the currents that often sweep around the Yongala often give the diving a degree of difficulty, the wreck remains well within the capabilities of most divers.

Penetration into the below-decks area of the vessel is comparatively easy. Inside the vessel there’s plenty to be seen and constant reminders of the ship’s tragic past. Among the stores and artefacts are the skeletons of those trapped below decks when the Yongala foundered.

Because of its status as a Historic Wreck nothing is allowed to be removed from the Yongala, a policy that ensures that the wreck will continue to hold a fascination for divers for many years.