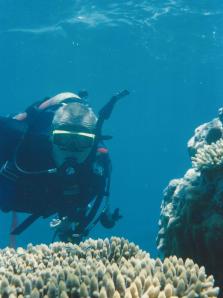 There’s no finer place for keeping abreast of all that’s happening in diving than the front bar of the “The Sozzled Cod”. As a gathering point for divers of every level of experience and underwater interest, it’s a place where reputations have been made – and tarnished.  (Just recently a regular made the claim that he’d taught me everything that I knew about diving … until somebody pointed out that I actually knew very little and that the boast wasn’t much of a reflection on his teaching skills.)

As a person still basking in the glory of having set a new world depth record – to the best of my knowledge, nobody else has demanded a trimix fill for a six-metre shore dive – I ignored the taunts. Until, that is, Krabbmann began pontificating about snorkels and I confessed to often carrying one with me. Overhearing my remark, the same person who’d cast doubts upon my diving abilities, couldn’t resist the opportunity to put the boot in for a second time. “You can’t be serious, Strike?” He said, loudly enough for everyone to hear, “Real divers don’t carry snorkels.”

Judging by the pitying looks that I received, it was obvious that more than half of the people in the room agreed with him. “It might just be me”, said Krabbmann, arching his eyebrows, “but from what I’ve seen lately it would certainly appear that snorkels have gone out of vogue. How many divers have you seen recently with a snorkel strapped to the left hand side of their face mask?”

It was a good point: Especially in light of the fact that an increasing number of divers are adopting a more streamlined and practical approach to equipment configuration; one in which a snorkel can become not only a general entanglement hazard but also interfere with the smooth passing off of a long hose in a gas sharing emergency.

As a system popularised by leaders of one of the world’s foremost cave diving exploration teams the equipment platform’s clean, uncluttered lines translates well to all types of diving: a process in which the snorkel (an equipment item with no practical benefit for a diver exploring the water-filled confines of a cave tunnel, or the confined compartments of a wreck) is increasingly regarded as a hindrance rather than the useful accessory that it can become when diving in the open ocean.

In that environment, it’s always seemed to me that a snorkel’s a useful tool for divers to carry. Especially when faced with a long surface swim back to the boat or shore.

Heads are, after all, remarkably dense and heavy things that seem naturally designed to float face down in the water with the nose acting like a yacht’s keel. Constantly having to raise them up in order to breathe is hard work.

“In that case” said Krabbmann, “you simply make yourself buoyant and swim along on your back.” Something that’s fine for short haul swims but not terribly practical over long distances when, in order to avoid cramping, it’s usually more comfortable and convenient to be able to alternate between a face-up and a face-down position in the water.

I say this from experience, having once surfaced from a dive together with my two buddies, (we were the only passengers on the vessel.) to see our dive boat disappearing over the horizon as the skipper followed an imaginary trail of bubbles towards China.

Faced with a long surface swim to the nearest island and a general unwillingness to ditch our gear, we set off swimming on our backs. Tiring of this, and not making a great deal of headway, I removed the telescopic snorkel that I carry in my backplate pouch and began swimming face down towards land. Lacking snorkels the other two divers also assumed the face down position, breathing from their regulators until they’d exhausted the remaining gas in their cylinders. At which point they were both obliged to begin swimming on their backs.

Unable to alternate between finning styles, and slowing down as the muscle strain began to tell on them both, one developed a cramp that required me to tow him the remainder of the way to the beach and safety.

“I don’t know whether either of them ever regarded themselves as ‘real divers’ before or since that day.” I told my critic. “But rather than making blanket statements to the effect that: ‘real divers don’t use snorkels’, (and possibly encouraging impressionable new divers to dispense with their use completely) what you should be asking is, ‘Where can I stow my snorkel so that it’s not an entanglement hazard, but still available in case of need?’”

To give him his due, it was a question that he’d obviously thought deeply about. He told me exactly where I could stick my snorkel.

This article first appeared in Asian Diver Magazine in January 2001