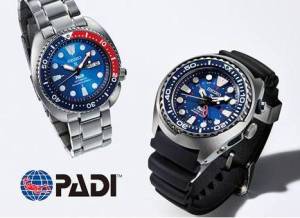 Back in the not-too-distant past, a good dive watch was much more than just a functional piece of bling.  It was also a status symbol that marked the wearer as a serious – and experienced? – diver. On occasions, it even became a life-saver.

Although its former role as an indispensible underwater instrument has been largely superseded by computer technology, the market for diving watches has, paradoxically, never been more buoyant.  Despite fierce competition, a handful of brand names still continue to dominate.  Widely acknowledged as being one of the leading manufacturers of quality time-pieces, Seiko have recently announced their partnership with the world’s leading dive training organisation, PADI, to produce a special edition divers watch.  It’s a commercial marriage that – from a personal perspective – is long overdue.

I’ve written elsewhere about my earlier experiences with dive watches  …

“Unable to afford one of the expensive and proven brands, I bought my first diving watch through a newspaper mail order advertisement.  The Russian-made, stainless steel watch looked perfect.  Best of all, it was cheap.  Although supposedly water resistant to a depth of 50 metres, it only worked when it was placed face down on a flat surface.  (I discovered this when lying on my back beneath a glass-topped coffee table watching the second hand whisk around the dial.)  At any other angle the hands jammed together.

“Two years later – somewhere south of Suez and still naïve in the ways of the world – I struck a deal with a street-trader for a slightly more expensive model.  Depth rated to 100-metres, (I liked the idea of a 90-metre safety margin.), the watch worked perfectly up until the moment when, a few hours later, the ship sailed and I took a shower.  The inside lens immediately fogged up with water droplets and the winder dropped off.  “

My next investment in diving safety was the ultimate in diving status symbols, a Rolex; a watch that I bought through the ship’s N.A.A.F.I. (Navy, Army and Air Force Institute – the UK version of the American P.X.) in Singapore, in the early ‘Sixties.  It met all of the requirements of a good dive watch; it was watertight, it had a one-way rotating bezel to indicate bottom-time, it was stainless steel and chunky, it kept perfect time and looked bloody great … and to add additional flavour it was the model made famous by the fictional character, James Bond.

In a perfect world, I would still be wearing that Rolex were it not for the fact that in late 1965 – and needing money in order to buy an engagement ring – I pawned it for £16.00. And while I’ve never regretted doing so, it did leave me without any means of gauging my dive time – and decompression schedules.  A replacement watch was called for.

After drowning several inexpensive and lightweight wrist-watches, I was – in the early ‘Seventies – eventually steered towards Seiko by a diving colleague on the North Sea oil rigs, a former Royal Marine and member of the elite Special Boat Section who was adamant that he owed his life to a Seiko watch.

Apparently – so his story went – he’d been taking part in a lengthy training exercise that involved parachuting out of a ‘plane and into the ocean wearing an O2 rebreather.  After landing in the ocean and releasing himself from the ‘chute, he and his companions navigated underwater towards what, for the purpose of the exercise, was an enemy-held island with a steep, ocean-facing cliff; a natural barrier to a conventional military assault .

Re-grouping at the base of the cliff, the team were then tasked with scaling the cliff, ‘disposing’ of any enemy sentries, and making the target safe for an invading force.  As with many people in the forces, ‘Little John’ wore his watch with the face on the inside of the wrist, a fashion that reduced the chance of reflections from the watch glass betraying their presence to an enemy.

Without benefit of safety ropes, ‘Little John’ started his ascent using the three-point system of climbing, a technique in which any three of the climber’s two hands and two feet always remain firmly in place – in a cliff-face fissure, or on a ledge – while the free hand or foot seeks the next secure position.

Half-way up the cliff face, ‘Little John’ almost came to grief.  With his body weight largely supported by a precarious toe-hold on a slight outcrop and while reaching up towards the next suitable projection, his feet slipped and he began an increasingly faster slide down the cliff face towards the rocks and boulders at its base, a long way below.

Frantically scrabbling for a purchase on the rock-face, his descent was suddenly halted when his watch case – worn on the inside of his wrist – snagged on a fracture.  It was sufficient to allow him time to establish firm foot and hand-holds and safely complete his ascent.  Apart from a few scratches on the glass, the stainless steel casing on his watch was unmarked.

It was a glowing endorsement that meshed with my belief that personal safety doesn’t come with a price tag attached.  I immediately bought a Seiko diving watch.  And while its role has changed to that of now providing back-up redundancy to my dive computer, I still consider it a worthwhile investment.  After five decades of remaining loyal to the Seiko brand, I still haven’t fallen down a cliff.