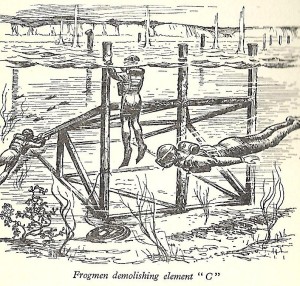 The first men ashore at ‘Gold’, ‘Sword’ and ‘Juno’ beaches on D-day, were divers of the Landing Craft Obstruction Clearance Units; a hundred and twenty ‘frogmen’ forming ten units (four from the Royal Navy and six from the Royal Marines) tasked with clearing away the underwater obstructions and mines so that the assault craft could land troops on to the beach.

It was known that the shores were protected by an array of obstacles laid below the low-water mark and hidden by a rising tide.  The most formidable of these obstacles was known as “Element C” – a two-and-a-half ton mass of steel that, because of its size, had to be destroyed in a scientific fashion with a series of 36 small and strategically placed explosive charges.

Another obstacle became known as “hedgehogs”.  Resembling a six-pointed metal star and festooned with mines and explosive charges that would detonate at even the slightest touch of an unwary invasion craft, the spars themselves were also capable of ripping the bottom out of a vessel attempting to pass over them.

Managing to dispose of more than 2,500 obstacles in the face of sniper fire from both rifles and machine gun posts, total casualties were two divers killed and ten wounded – most seriously.

(Artists impression of divers preparing an “Element  C” obstacle for demolition from the 1950 book, ”The Frogmen”, by Waldron and Gleeson.)