Seen by many moviegoers, but known by few …

Joining the Royal Navy on his 18th birthday in 1938, the late Commander Philip White, R.N., was one of 370 survivors when, on the 14th October 1939, the Royal Navy battleship, HMS Royal Oak, was sunk, with the loss of 833 lives, at its mooring in the protected anchorage of Scapa Flow by a German U-boat.

Serving with distinction throughout the war, Philip White became a Clearance Diver qualified in underwater bomb and mine disposal, before accepting a commission as an officer. 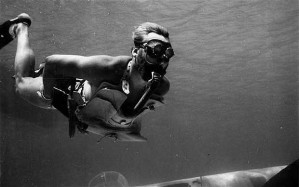 Still from the movie, ‘The Silent Enemy’

As Commander of the Mediterranean Fleet Clearance Diving Team, based in Malta during the post-war era, he and his team disposed of over 900 bombs and mines, many of which were underwater.  Later serving as the Royal Navy Superintendent of Diving, he also appeared in the underwater scenes in two British movies, appearing with Sir John Mills in “Above Us The Waves” – centred around the attack by British ‘human torpedos’ and the X-Craft midget submarines on the German battleship, ‘Tirpitz’ – as well as “The Silent Enemy”, where he performed all the underwater diving shots for the British actor Laurence Harvey in his role as the Navy diver, ‘Buster’ Crabb and his exploits in Gibralter during WWII.

Serving in the Royal Navy for 32-years, he subsequently Joined Siebe, Gorman & Co, where he served as Manager of the Underwater Division before marrying and moving to the USA.

Commander White died at the age of 92, in June 2013 at Pensacola, in Florida.