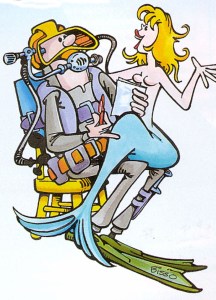 Not many people realise that the idea of stuffing olives was hit upon by an obscure sect of Spanish nuns who, when there was a seasonal glut of the things, came up with the idea of removing the pit and substituting it with a slice of pimento.  These stuffed olives proved so popular – and financially rewarding for the convent – that it gave rise to a major industry with, it is said, a good nun being able to stuff up to 600 olives a day.

Needless to say their role in this entrepreneurial venture was soon forgotten when a money-grubbing industrialist mechanised the process and – able to produce more stuffed olives in an hour than a nun could in a day – captured the market and put the convent out of business.

It’s the sort of trivia that Krabbmann sometimes comes up with as a prelude to talking about ways of making money out of the diving industry.

“It’s sad,” he said, “to think of those nuns spending years stuffing olives in order to raise money for charitable purposes, only to have somebody with greater resources capitalise on their discovery and reap all of the rewards.  But that’s market forces for you.

“Diving’s no exception.” He continued.  “Look at Haldane.  The same thing happened to him; except that he spent years stuffing goats into recompression chambers – rather than pimentos into olives – in order to formulate a set of decompression tables that would alleviate the bends.

“Having laid the groundwork, his freely available findings were taken up by later generations of researchers, many of whom developed their own proprietary tables that they now sell at a profit to other users.  Stuff happens.”  Krabbmann said, philosophically.

Having gone down a similar path, I sympathised with the nuns and Haldane.

As the President of Zymurgy Inc., (an international not-for-profit consortium of diving technologists committed to providing divers with equipment so ahead of its time that no recognisable need for it yet exists) I played a prominent role in the design and development of the world’s first Nitrox Snorkel, the ‘Uranus’.

With the intention of sharing all of our designs with the entire diving community, we never considered slapping a patent on ‘Uranus’, a snorkel that, in outward appearance, resembled the 1954, U.S. Divers model; the one with a ping-pong ball valve at its upper end.

With all of the usual characteristics of a conventional snorkel, what set ‘Uranus’ apart was the inclusion of a membrane adsorbent located in a canister midway along the stem of the snorkel:  A mechanism that served to filter unwanted gases from the mix while allowing the operator to select the appropriate oxygen mix via a manually operated spindle valve attached to the reservoir well at the snorkel’s lower end.

Unlike modern snorkels, the top of ours curved downwards and was fitted with an open sided ‘cage’ housing the microchip sensor device, a ping-pong ball shaped instrument that automatically switched the mix to 21% oxygen on the surface.

However, and despite positive comment from that small core group of divers interested in pushing technology to its limits, sales of ‘Uranus’ weren’t even sufficient to cover our R&D costs.  (Probably because of our insistence that every purchaser paid an additional fee for the mandatory two-day training course in its use.)

Turning our attention to other more lucrative projects, we told the distributor to “sit on Uranus”, and then promptly forgot about it.  Until just recently, that is, when another diving organization, realising the enormous profit potential in the compulsory training programme, launched their own version of the Nitrox Snorkel. 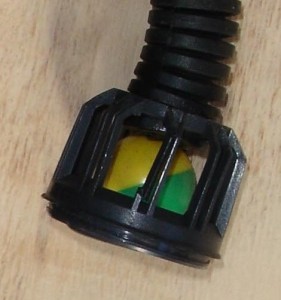 A shameless copy employing the same technology as our original design, the only difference between their unimaginatively named, ‘E-Snorkel’ and the ‘Uranus’ was the replacement of our manually operated spindle valve with an automated electronic gizmo.  An innovation that, they claimed, gave the E-Snorkel greater appeal by eliminating the need for users to think for themselves, thereby reducing the time and cost of training and encouraging more sales.

It was impossible to say who’d been stuffed the most:  Zymurgy Inc. for failing to patent the Nitrox Snorkel, or the would-be divers trained to believe that technology really is a replacement for knowledge.