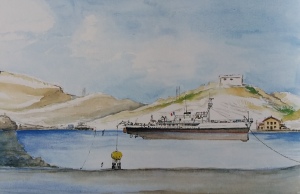 Artist impression of Conshelf 1 and the ‘mother-ship’ Calypso

“Under water man shall walk, Shall ride, shall sleep, shall talk”:

Increasing the efficiency of working divers, Dr George Bond’s concept of saturation diving (a concept in which divers would live and work under constant pressure for extended periods of time before being subjected to one lengthy decompression schedule) was initially rejected by the U.S. Navy.

Captain Cousteau visits Claude Wesly and Albert Falco during their week-long stay in the comfortable but cluttered quarters of the Conshelf 1 habitat.

Captain Jacques Cousteau and the dive team from, ‘Calypso‘ were more receptive to Bond’s idea, and in September 1962 (two years before the U.S. Navy’s first ‘Sealab‘ experiment) tested the concept of, in Cousteau’s words,  “Two men living for one week in a small building at a depth of 37 feet and working several hours a day at 65 feet.”

Consisting  of a heavily ballasted , room-sized cylinder with an open hatch at its base, the habitat was towed to a bay off the coast of Marseille and, on September 14th 1962, submerged to the required depth.  Two divers, the legendary Albert Falco and Claude Wesly, spent several hours each day for seven days, carrying out work at a depth of 65 feet before finally surfacing one week after their initial descent, on September 21st, in perfect health.

The concept of saturation diving was finally vindicated and paved the way for two further, more ambitious and deeper, Conshelf experiments.