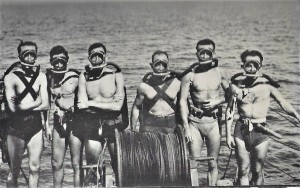 (The first divers of the Undersea Research Group. They are – Left to Right – Cousteau. Georges, Tailliez, Pinard, Dumas, Morandiere.)

Earlier, in 1943, the trio – using the self-contained diving apparatus recently developed by Cousteau and Gagnan – had spent five months filming a documentary on the wrecks of nine vessels lying between Marseilles and Cavalaire, in the Mediterranean.  “The film, ‘Sunken Ships’” writes Tailliez, “went several times round the world, spreading the news that the era of independent diving had arrived.”

In an endorsement of the book, ‘To Hidden Depths’,Tailliez’s memoirs of those early years of “independent diving” and the ground-breaking research work subsequently undertaken by the Undersea Research Group, Cousteau wrote:

The memories of the first steps which Dumas, you and I took together under water, and our raptures and our fears, are rooted in the bottom of our hearts.  From the first moment your fervour sustained and inspired our team.  ‘To Hidden Depths‘ will be the living reflection of the spirit which you instilled in us and in the group.