Widely regarded as one of the region’s most accomplished Technical Diving Instructors, Gideon Liew was first introduced to diving in 1984 at the age of 17. Finishing his schooling and wanting to “learn something exciting”, he signed up for an open water diving course in Singapore. Despite the low visibility, the experience was one that inspired him. Continuing his diving education, he took a NAUI Advanced and Rescue Diver course before enlisting in the army as an infantry specialist.

Completing his 6-year engagement with the army in 1990 and with no firm plans for the future, he took a month-long holiday to help out a friend with a dive store on the Malaysian island of Tioman – a life-changing decision that ultimately led to his becoming an SSI Instructor in 1994.

With a wealth of knowledge and experience gained while working as a freelance Instructor for a number of different dive shops, and with a vision on how diving should be taught, he decided to open his own business. Established in 1999 with the objective of providing effective, ‘No Frills’ dive education, Living Seas is now regarded as one of Singapore’s premier diver training operations.

An enthusiastic Technical Diver with an open and enquiring mind, the ‘Doing It Right’ (DIR) training philosophy espoused by the newly emerging Global Underwater Explorers (GUE) organization, sparked Gideon Liew’s interest. Completing the GUE DIR Fundamentals and Tech 1 programmes on the island of Tioman in 2000, he subsequently went on to become one of the region’s first two GUE Instructors.

An ambassador for diving – and a person who has done much to correct the prejudices and misconceptions that often exist in people’s minds regarding DIR and its underlying principles – Gideon Liew was recently in Sydney to conduct a series of Tech 1 programmes.
———–
Q. When did you first hear about DIR?

I first heard about the DIR concept from Michael Lim, Davy Koh and Phi Le in 1996. In those days I thought that it was an equipment configuration system rather than a philosophy that encouraged a holistic view of diving; one with its own formalised training programme.

Although I had been teaching technical diving through another agency for some while, it was a period of confusion; a time when questions about technique seemed to lack definitive answers and where Instructors blindly taught programmes without necessarily understanding the intention or spirit of the standards. As a consequence, I had stopped teaching technical diving and focussed instead on teaching the more mainstream recreational training programmes.

This all changed when, in early 2000, the Halcyon dealer in Singapore invited the GUE Training Director to come and teach GUE’s recently developed DIR Fundamentals and Tech 1 programmes. It was a revelation.

Q. In what way was it a revelation?

It was an approach to diver training that was readily and easily understood. Placing equal emphasis on all of the facets of good diving practice – training, teamwork, fitness, attitude and equipment – the system made perfect sense to me.

Helping individuals realise – and where possible improve upon – their limitations and weaknesses, the course structures were far more demanding than the usual training programmes that encourage the ‘permission-to-dive’ syndrome; those where the student relies heavily on the Instructor to make all of the decisions regarding safety and well-being.

Because the system offered a fresh perspective on how best to teach an aspect of diving that I thoroughly enjoy, I went to the States in 2002 to take GUE’s Fundamentals Instructor Training Course and to begin the internship phase of training as a GUE Instructor.

It was a demanding programme and certainly no, ‘walk in the park’. But then again, effective instructing is, to me, a full time job requiring thorough training, knowledge and experience, and a total commitment to the task. It’s something that students have a right to expect of everyone who teaches diving.

Q. As a GUE Instructor, what – for you – are the qualities that set it apart from other agencies?

While the mechanics of diving remain the same, GUE nevertheless manages a different approach towards training. Founded on learning to dive safely by weighing the benefits against the risks, the emphasis is on mastery of core skills, acceptance of responsibility, fitness and how to be a more effective team player.

It’s often mistakenly assumed that DIR divers are part of some sort of exclusive club whose members can be clearly identified by virtue of their equipment selection and its configuration. Nothing could be further from the truth. While equipment configuration plays an important role in the DIR philosophy, it’s only one aspect of a wider holistic approach to effective underwater safety.

Because of the nature of the activity, technical diving requires a lot of preparation and effort if it’s to be conducted successfully. It’s both a physical as well as a mental challenge and requires the same sort of investment in fitness and attitude as, for example, a runner preparing for a marathon.

Refining skills to the point where they become second nature and encouraging mental control by preparing divers for worst-case scenarios, that’s the challenge in diving and something that GUE excels at in its teaching programmes.

Q. What, for you, is the attraction of technical diving?

I have always wanted to excel in my diving skills and in my understanding of the underwater environment. In that regard, Technical Diving has been a natural progression, one that, as somebody once said, requires constant vigilance, knowledge and maintenance of skills if it’s to be conducted properly.

It’s a sport requiring a considerable investment in effort and one in which people must be prepared to accept responsibility for their own actions and well being.

For me, Tech Diving is a challenge that begins with a better understanding of the fundamental issues. These include control skills, an understanding of the environment and how it affects us, awareness, effective decision-making, a willingness to work as part of a team, fitness, as well as the courage to accept the consequences of one’s actions. 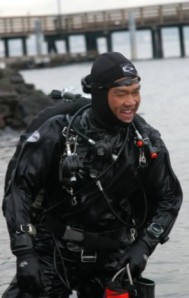 Q. What type of diving gives you the most pleasure and satisfaction?

It depends. Every diving environment has its own unique attractions and I enjoy each one in its own way.

I particularly enjoy diving in the overhead environments of wrecks and caves. Although I’ve dived the caves in Florida and South Australia, I don’t get a lot of exposure to cave diving. But I do it every chance that I get. It’s awe inspiring to suddenly enter a huge cathedral-like cave with water so clear that it’s almost akin to flying.

The wrecks of the South China Sea hold particular fascination for me. Diving on, for example, the wreck of the super tanker, ‘Seven Skies’, is an incredible experience. With no land in sight, divers descending down the line are suddenly confronted by an enormous structure appearing beneath them.

Diving mostly around the SE Asian region, I’m also fortunate to be able to appreciate and enjoy the marine life found on the reefs in places like, Tioman and the Aur islands in Malaysia, Manado, Anambas Islands, Phuket and Borneo.

Although I was first attracted to diving because of the ‘danger’ and excitement, it’s since become a passion. Now simply being underwater gives me enormous pleasure. Entering an entirely different environment is a wonderful form of relaxation.

But most of all, I enjoy helping other committed divers discover their full potential.

The above interview first appeared in Nekton on-line magazine in November 2005.