Home › General › Lighting up the night

Lighting up the night

As everyone who dives comes to realise, having even a rudimentary knowledge of the ocean’s bio-diversity is an asset – especially when it leads to an increased enjoyment of the activity. 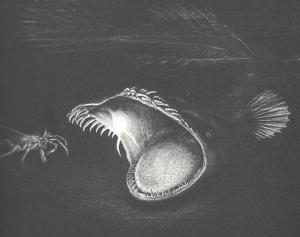 One of the great appeals of night diving is that for those who bother to look even the most mundane dive site offers unique attractions when viewed during the hours of darkness.

Nowhere is this more evident than when diving from either a boat or shore on a moonless night away from well-lit areas. Depending on the season, and the play of tides and currents, creatures whose size often renders them almost invisible during the daylight hours contribute to one of the ocean’s most spectacular phenomena, bioluminescence.

Ranging from microscopic plankton, jellyfish and shrimps through to large squid and cuttlefish, the creatures capable of producing biological light are huge in number. And while the phenomena can often be witnessed in its milder forms in the breaking waves of a shoreline, it’s out in the open ocean that the most dramatic displays occur.

While pulsing discs of light, some measuring tens of metres across, occasionally mark the presence of scores of jellyfish, it’s the creatures of another ocean phenomena that, churned to the surface in the wake of a liveaboard’s propeller, create the most consistent and dazzling light displays.

Bioluminescence
Although a number of terrestrial organisms, such as fireflies, can produce biological light, it’s in the oceans that it’s most in evidence with the light producing organs falling into one or other of two categories.

In their most sophisticated form, they may have focussing lenses, reflectors and colour cells that not only give the light a distinctive colour but that also control the amount of light emitted. In some fish this consists of a flap of skin – similar to our eyelids – that it can draw over the light-producing organ.

Able to flash the light on and off very rapidly, the shrimps use light to attract prey as well as other members of its own species, the particular colour and flashing sequence of lights distinguishing one species from another. Some, like the Euphasid, even have a large photophore situated next to the eye that can revolve and act as a searchlight.

This bioluminescent light serves three purposes: It attracts prey; it enables members of the same species to readily distinguish one another for the purpose of mating, (an especially important attribute in deeper waters where it is perpetual night); and thirdly, it serves as a defence mechanism by dazzling a would-be-predator with a brilliant flash of light that allows time for the creature to escape.

In some instances the creature can even eject a luminous fluid to further confuse a would-be predator. Although seen as an inky fluid by day, the substance emitted by squid is a perfect example of this. Faintly luminescent and resembling the shape of the squid, the ‘shadow’ creature acts as a decoy while the squid swims quickly away.

Turn out the lights
Although the usually shallow waters of a night dive may not have an abundance of these light-producing creatures, they’re still to be seen. Just turn off your torch for a few minutes, allow your eyes to become accustomed to the gloom, and then wave your hand through the water. The chances are that even the microscopic plankton will turn on a light show that can make any night dive a memorable experience.