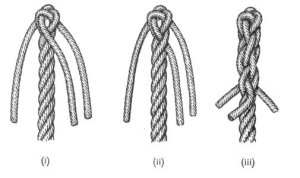 Every working diver worth their salt should have a sound knowledge of rigging procedures and elementary knots and splices. While the ability to tie the appropriate knot in zero visibility; quickly splice a line to a shackle; or join together two pieces of rope of similar size so that they run smoothly through a block will often help to make a complex job less difficult, it’s still surprising to discover how few divers’ have the necessary skills to tie anything more complicated than a bowline.

Although splicing with wire is a more complex issue – and nowadays, in any event, is generally performed mechanically – every professional diver should be capable of splicing a rope. As a method of preventing a loose end from unravelling, joining two ropes together, or making an ‘eye’ – a permanent loop in a rope’s end – a splice has several advantages over a knot. In a join a splice gives a tidier and neater appearance than does a knot and unlike a knot, which reduces the strength of a rope by about 50%, a splice will only reduce its strength by about 12%.

Most splices have several variations or modifications usually determined by the number of strands in the rope. Also the number of tucks required to complete the splice will depend on whether the fibres of the rope are natural or man-made. Natural fibres tend to require a minimum of four tucks while man-made fibres, being more elastic and smoother, require five or more tucks to satisfactorily complete the splice. For ease of illustration the following basic splices are made using natural fibre, three strand rope.

(To prevent the rope ends unlaying in the early stages, many people first unlay the rope to the point where the splice will begin and then whip it and the separate strand ends using sailmakers twine, or similar. Whipping is unnecessary when using man-made ropes as the ends can easily be bound by adhesive tape and later fused together with a lighter flame.)

Back Splice
Used to prevent the end of a rope not required to be passed through a block from un-laying.

Cut the whipping and then tuck each strand over one strand and under the next, to the left and against the lay of the rope. After each strand is tucked, pull the strands taut and repeat the process several times. (After several tucks you can taper the splice down by splitting each strand in half for each remaining tuck).

Eye Splice
Used to make a permanent ‘eye’ in a rope’s end and usually employing a ‘thimble’ – a metal form scored to the circumference of the rope that helps to prevent chafing. (Referred to as a ‘soft eye splice’ when no thimble is used)

Short Splice
The strongest and most secure method of uniting two ropes. However, because of the thickness of the join it is not suitable where it may be required to pass through the sheave of a block.

After unravelling the strands to a suitable length (about 8 times the circumference of the rope), put a temporary seizing, or whipping, around the two ends and marry them together. Tuck the strands of each rope between the strands of the other rope. Working with the left hand strands to begin with, pass the left hand strand over the first strand next to it and underneath the second strand, haul it taut, then enter the right hand strand, and finally the middle strand in a similar manner to that of the left-hand strand. Haul them taut along the lay of the rope. Repeat the process with the right hand strands for a series of three to four tucks on each side of the joined rope. Trim the ends and roll the rope under foot to work the strands into place.

With a little practice a diver can very quickly gain proficiency in these simple splices.