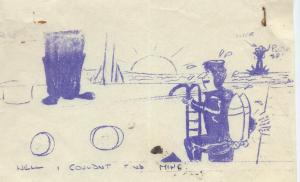 Back in 1964, the ‘cold war’ – with its politically complex uncertainties – was in full swing; the sun was setting rapidly on what remained of the former British Empire’s outposts; Dr Timothy Leary preached the use of psychedelic drugs and encouraged the young to, “turn on, tune in, drop out.”; the Gulf of Tonkin incident paved the way for the Vietnam conflict; the collision between the aircraft carrier, HMAS Melbourne and the destroyer, HMAS Voyager cost the lives of eighty-two seamen; the environmentalist, Rachel Carson, and the diving physiologist, J.B.S. Haldane both died, and telegrams with costly, impersonal and staccato-like printed messages were the favoured means of quick communication. In short, the world back then was not a simpler place, it was just a vastly different one to that of today; technology being the major game-changer that makes the world of yesterday appear to have been a much simpler place in which to live.

The reality was that, in that pre- e-mail/internet/smart-phone/social media era, we always believed that we were at the cutting edge of communications technology. To keep the crew appraised of all that was happening on a day-to-day basis, HMS Chichester – like most H.M. ships of the day – had a mimeograph (roneo) machine that could be used to pump out a ship’s ‘newspaper’.

Called the ‘Eclipse’, our ship’s newspaper commented on a variety of issues, including the upsets caused during our work-up exercises at Portland when the Flag Officer Sea Training (FOST) and his staff would devise cruel situations designed to see how we would respond … and whether we were really qualified to be let loose with millions of dollars worth of tax-payers money.

One of the established exercises was, ‘Operation Awkward’; Regardless of where you happened to be in the ship at the time, when the pipe over the tannoy system called, “Operation Awkward”, the ship’s dive team were required to be fully ’booted-and-spurred’ and ready to enter the water within three-minutes to carry out searches for limpet mines and other explosive devices.

Getting dressed in one of the early, neck-entry dry-suits – with a metal clamp, neck-seal and metal locking ring – was an exercise in itself … and one that everyone should experience at some stage in their diving career.