“It’s easy for a diver to be a coward and difficult to be brave because he usually works alone, unseen, uncriticised and unpraised … most of the foes are within himself and the victories unobserved.” 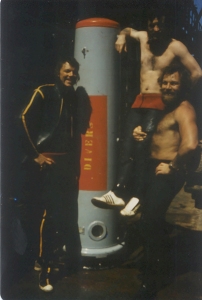 On this day in 1972, I was trapped at a depth of a little over 120 feet inside the 38-inch diameter leg of a fixed-platform drill rig being erected in the southern part of the North Sea.

The platform’s base had been towed into position on a large, purpose-built construction barge. Valves allowing free flooding of the legs were opened and the entire structure tilted and, with the aid of the barge’s heavy-duty crane, settled into an upright position on the seabed. The conical plugs sealing the bottom of each leg would then be removed and pilings driven down inside the legs to firmly anchor the platform in position.

Removing the conical sealing plugs should have been a straight-forward task. Each plug had a heavy chain shackled to its top with a wire hawser crimped onto the chain’s free end. These hawsers passed up the entire length of each of the eight legs and ended in an eye-splice that could be easily attached to the crane’s hook. In a perfect world the crane would then haul up the plug and clear the way for the anchoring phase of the operation. That it’s not a perfect world became evident during the process of ‘pulling the plug’ and the discovery that none of the wire hawsers had been properly secured to the chains. A disaster that meant either an extremely costly attempt to refloat the platform and a return to the construction yard, or sending down divers to try and retrieve the situation by re-attaching the wire hawsers to the chain. The company tasked with carrying out all of the construction barge’s diving requirements had declined the job on safety grounds.

Although we were contracted to a competitive oil exploration company, our five-member dive team – two former SBS Royal Marines, one former Para (the nominal ‘Diving Supervisor’) and two former Royal Navy sailors – were working in a nearby sector just a short helicopter ride away. We received a radio plea for help … and offered a huge cash inducement for what appeared to be a seemingly straight-forward task. We agreed, and – with eight legs requiring attention – drew straws to see who would dive twice and earn a greater share of the bounty.

Each leg was accessed along what would, on the completed platform, be the lower catwalk. We were then required to climb ten-feet or so up one side of a rope ladder slung over the open top of the leg, negotiate the lip, climb down the inside of the flooded leg to the water’s surface, and then – while firmly grasping a loosely fastened shackle now firmly attached to the business end of the slack wire hawser – descend to the cone-shaped plug, retrieve the chain, attach it to the hawser with the shackle, ascend, climb up the inside ladder, clamber over the lip, and then climb down the outside of the ladder back on to the catwalk; all of which would be performed within the no-decompression time limits and while – because of the problems of effectively deploying an umbilical surface demand hose – wearing twin-cylinders. (In those days the concept of redundancy was considered an unnecessary extravagance. We used a single regulator attached to the manifolded twins. BCD’s were not even on the horizon of our thinking. Instrumentation was limited to a watch with rotating bezel set to the start of the dive. Fins were redundant in the tight confines of the pipe and, given the nature of the task, hand-held lights were equally superfluous.)

The first leg went without a hitch. I took the second leg. 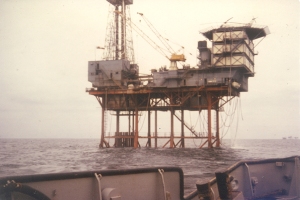 Having negotiated the climb up and down the rope ladder to the water’s surface inside the leg, I took a firm hold on the shackle and wire, and – with ambient light restricted to the small opening at the top of the leg before being filtered through a thick layer of oil – quickly sank into total darkness. Feeling my way down the narrow tube, I eventually came to rest on top of the cone-shaped plug. Unable to bend little more than a few inches either forward or backward without either my head or the cylinders coming into contact with the circular 38-inch diameter walls of the leg, I began to straddle the cone in order to properly reach the chain. Reaching down between my legs, my hand brushed against the chain and dislodged the heavy links from their perch. Before I could grab hold of any part of the chain, the heavy links tumbled down into the sloping gap between the tube’s wall and the plug, firmly trapping one of my legs. After unsuccessfully struggling to free myself and only succeeding in over-breathing the regulator, I quickly came to the realisation that I was stuck fast.

Because of the equipment choice – and the belief that it was to be a quick and straight-forward task – we had no communications system that I could use to inform those back on the surface of my predicament. Attempts to haul my legs free of the entrapment by pulling myself up the hawser were thwarted by the fact that we had purposely left the wire free running. Pulling on it would only add to my woes by bringing coils of slack wire down around my shoulders.
Trapped in the pitch blackness and with the knowledge that it would be some while before those on the surface became aware that there might be a problem – and who, even then, would probably be unable to do much to assist – I struggled to quell a rising panic.

Bringing my breathing rate back under control, I managed to pull one of my legs free of the few links that had settled on that side of the plug. With the combined leverage provided by pushing against the side of the cone-shaped plug with my free leg and pressing downward with my hands against the walls of the tube I was, for short yo-yo bursts, able to ease the pressure on the trapped leg and, by wriggling my foot, gradually ease it free of the bulk of the chain to the point where I could eventually reach down and grasp the links. A process that – judging later by the time spent underwater – probably took less than twenty-minutes but that seemed to take so very much longer.

Slowly feeding the chain through my hand, I kept a firm hold on the final links while carefully feeling for the hawser and shackled end with my free hand. With fingers that were now puffy and softened by the water and the cold, I managed to secure the shackle to one of the chain’s links and the job was finally complete. All that remained was the ascent, an extended seat-of-the-pants decompression stop (our one concession to safety had been to rig a short weighted line attached to the lower rungs of the rope ladder with decompression stops down to the 30-feet mark indicated by knotted pieces of hessian sacking) followed by the climb back up the rope ladder and down the other side to the safety of the catwalk.

Aware of the friendly rivalry that existed between the former Special Boat Section Royal Marines and ourselves, the Supervisor took great delight in writing up the scoreboard for that day’s work: “Cockleshell Heroes – 4: The Navy Lark – 3.”

I had survived another scare and added to the sum of my knowledge about diving safety and the mechanics of fear.

Two-years after the above incident, and concerned by the enormous number of diving fatalities that plagued the North Sea offshore oil and gas industries during the early ‘seventies, the U.K. Government became the first to introduce universal legislation directed at both off-shore and on-shore occupational diving activities with the stated aim of ensuring that equipment, operational procedures and personnel were adequate in all respects to meet the high risks involved. Administered by the UK’s Health & Safety Executive (H.S.E.), the system of personnel selection and training came to be regarded as the world’s ‘Best Practice’.